Gaining weight in your 40s despite not changing how you eat or move? (Part 1 of 2) 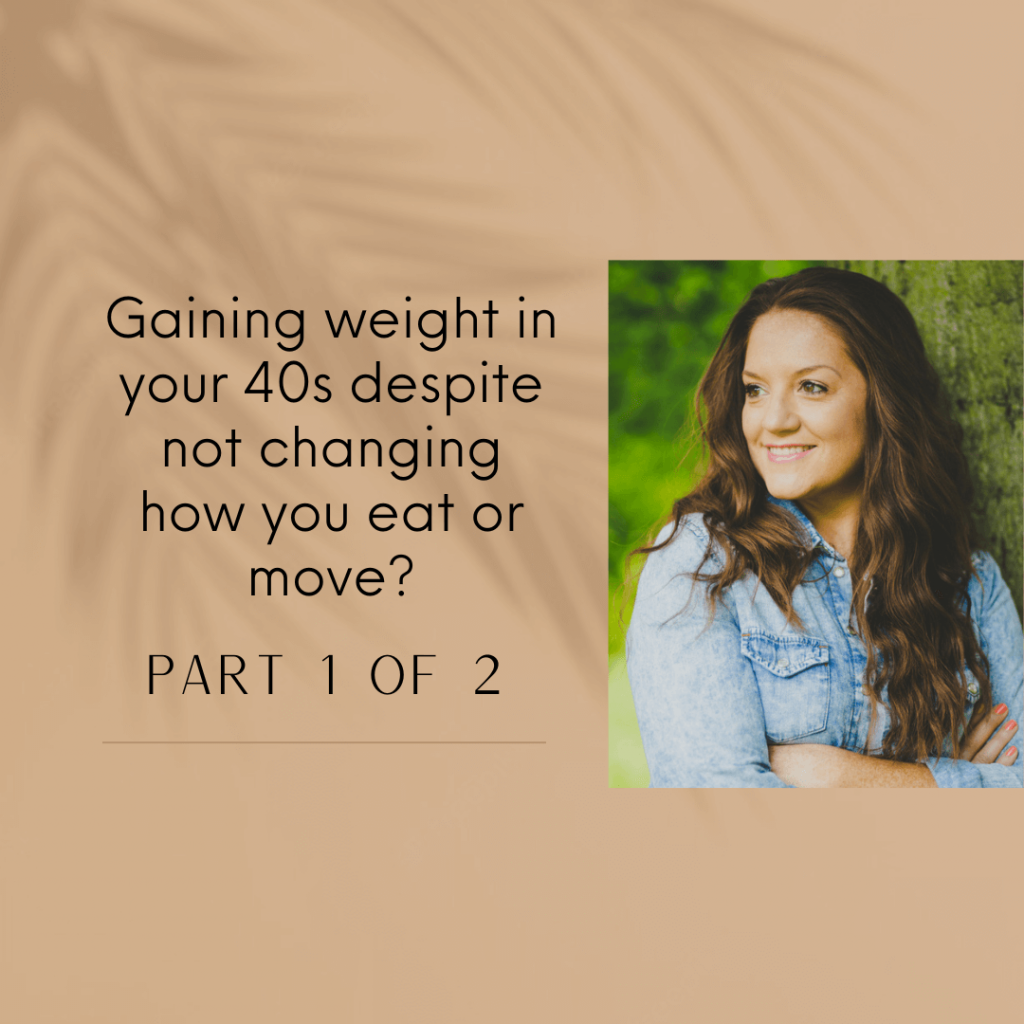 Are you noticing weight gain, particularly around the middle, since moving into your 40s, despite not having changed anything you do or eat?

Or maybe you’re trying to shift a stubborn couple of kilos or inches and despite eating well and following good advice you just can’t crack it?

You’re not alone! As the female body moves into its 40s, it becomes better at storing fat and worse at maintaining muscle mass – *sigh*.

Although it is certainly harder to shift weight (body fat) in your 40s than it is in your 20s and 30s, it’s not at all impossible. Once you have a better understanding of HOW weight gain becomes more likely after 40 and what you can do to counteract it, you can start to feel a lot better about it and start to take informed action. In this blog, I explain why and how your body becomes better at storing fat in your 40s and in Part 2 of this blog, I explain what you can do about it!

WHY ARE YOU GAINING WEIGHT IN YOUR 40S?

There are a few factors at play so let’s take a look at these now.

From around age 35, your muscle mass starts to decline by 3-5% every 10 years, which slows your metabolism down. This is true for both men and women, it’s called sarcopenia and is defined as an age related, involuntary loss of skeletal muscle mass and strength.

Your muscle mass is one of the largest components of how much energy you burn each day and so the less muscle you have the less energy you will burn and the more body fat you will gain. Muscle is its own incredible organ, known as the organ of longevity, essential for many aspects of your health, including healthy metabolism and body composition.

The good news is that you can counteract the decline in muscle mass as you age by continuing to BUILD it! The WORST thing you can do past age 35 is NOT be doing exercise that builds muscle. Focusing on cardio and HIIT workouts isn’t going support muscle building to the extent you need it to, in fact past 40, it’s likely to result in LOSS of muscle mass because long duration cardio, HIIT, boot camps and spin classes can be what’s known as ‘catabolic’ (breaking muscle down) rather than ‘anabolic’, which builds muscle. Lifting, pushing and pulling relatively heavy weights is what you NEED to be doing, 2-3 times per week past 40.

​​Protein is KEY for helping to both maintain and build muscle mass and in your 40s and beyond, protein and muscle mass are two of your biggest health and wellbeing tools. The minimal optimal daily intake of protein is 1.5 grams per kilo of your own body weight, split out across 3 meals.

Oestrogen and progesterone are metabolic hormones, which means they play a significant role in your body’s ability to maintain a healthy weight and keep body fat in check. The changes in these 2 hormones, occurring from your late 30s (perimenopause) plays a key role in the weight gain that so many women experience in their 40s. Let’s dive deeper into some of this now..

Insulin Resistance might not be something you know about or have considered but it’s a really important concept to understand if you’re 40+.

Oestrogen keeps your cells ‘sensitive’ to insulin and the high and fluctuating levels of oestrogen that we see in the earlier perimenopause years (early 40s) can impact how sensitive your cells are at various times. Then, in the later stages of perimenopause (late 40s), when oestradiol starts its decline, cells start to become more and more prone to insulin resistance, resulting in more and more of your glucose being converted into body fat. Insulin resistance can also cause high cholesterol, high triglycerides and something called fatty liver, which is the accumulation of fat in the liver.

What is insulin resistance?

The hormone insulin is released by your pancreas in response to you eating. The sugars from your food (including straight up sugar and the more complex sugars in foods such as potatoes, rice, pasta and beans) are absorbed into your bloodstream. Insulin escorts the sugar (glucose) to the cells of your liver and muscles, your cells take what they need (for energy) and the rest is stored in fat cells (as body fat).

Insulin ‘resistance’ occurs when your cells become less receptive or ‘sensitive’ to insulin and no longer soak up the glucose. This means the glucose remains in the bloodstream, the pancreas makes more insulin in response and most of the remaining glucose gets stored in your fat cells because your body cells will no longer take it in.

The opposite of this is insulin ‘sensitivity’, which is when your cells are responsive (sensitive) to insulin and therefore efficiently soak up the glucose for energy and less of it, if any, is leftover to be stored in fat cells.

If you’re gaining weight around the middle and / or experiencing symptoms such as brain fog, low energy and fatigue, mood swings, anxiety, joint aches, sleep issues and headaches, this could also be due to insulin resistance.

Aside from changes in the way oestrogen behaves in your 40s, carbohydrate consumption is a major driver of insulin resistance vs sensitivity and your tolerance of carbohydrates changes after 35.

The more carbs on your plate, including the healthier types, the more glucose your body will make from your meal and in your 40s, thanks to the change in hormones and extra propensity towards insulin resistance your tolerance for carbohydrates reduces. This doesn’t mean you need to ditch carbs completely or be on a keto diet, just that you may need to start changing your relationship with carbs and your reliance on certain kinds. If wraps, baguettes and sandwiches and pasta feature regularly in your meals, then it’s time to re-think things.

Progesterone also plays a role in your body’s ability to burn fat and build muscle and when progesterone starts to decline in your 40s you have yet another factor potentially contributing to weight gain. Add to this the fact that declining progesterone leaves oestrogen ‘unopposed’ some or many months, and oestrogen dominance is another cause of weight gain.

Your thyroid is your metabolism regulator. Declining progesterone and dominating oestrogen can impact your thyroid health so it’s important to be checking some of the key thyroid markers at least annually past 40, such as T4, T3, TSH and thyroid antibodies. If your thyroid hormones are within optimal ranges it’s much easier  for your body to burn fat and maintain a healthy weight. If they are low, or even if they are ‘normal’ according to the conventional reference ranges, they could still be below par and your metabolism, making it almost impossible for you to burn fat.

Chronic, modern day stress plays a significant role in weight gain in your 40s. Cortisol, your body’s main stress hormone and the one that hangs around for the longest as part of the stress response, is a big reason for the so-called ‘muffin top’. Cortisol has the ability to break down your muscle tissue and convert it into glucose, which is then likely to be stored around your middle. Plus, as progesterone declines in your 40s and oestrogen fluctuates on its rollercoaster, cortisol levels naturally rise. So, cortisol is more likely to be out of balance in your 40s and the situation becomes worse when chronic stress is part of the picture also.

WHAT CAN YOU DO?

The GOOD NEWS is that simple diet and lifestyle interventions make a profound difference to all of the above including preventing and even reversing insulin resistance! In part 2 of this blog, I’ll provide top tips on what you can do!

PrevPreviousWhat does progesterone do and why does it decline in your 40s?
NextGaining weight in your 40s? 7 Ways to reverse or prevent it (Part 2 of 2)Next 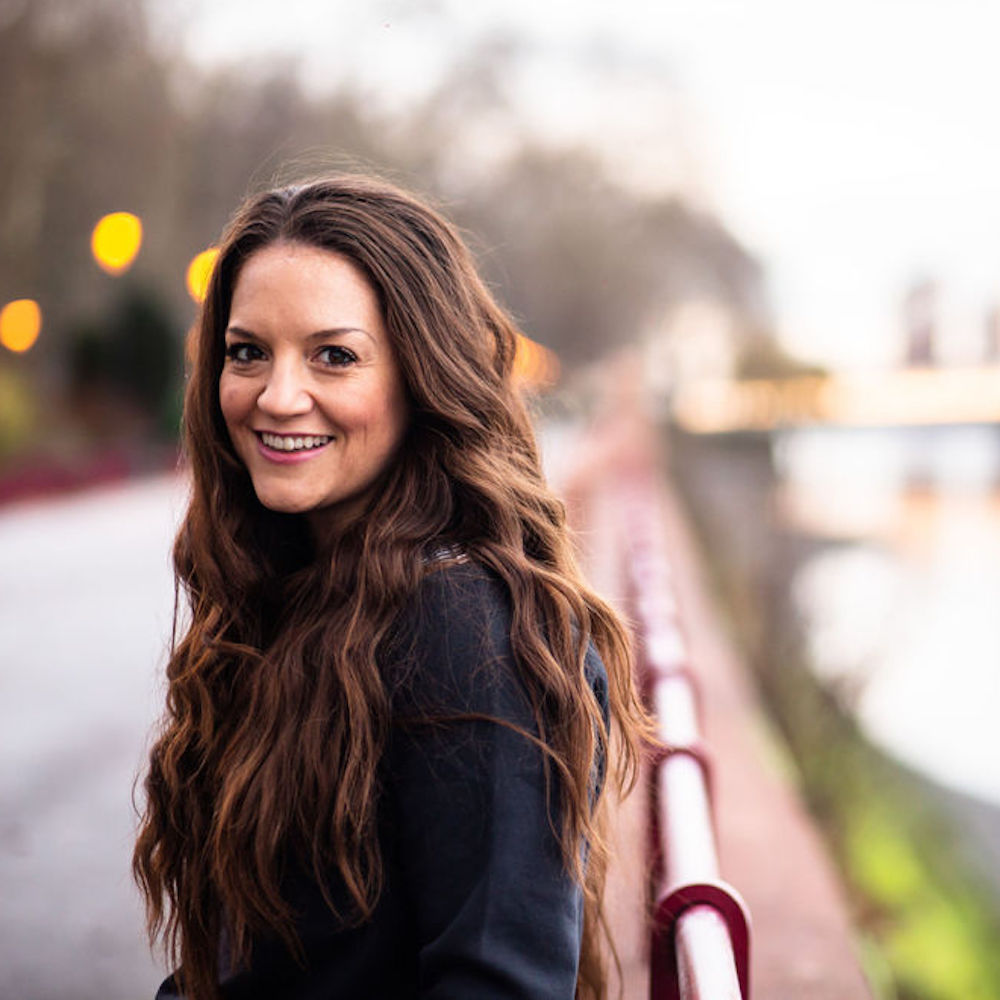 I’m a Registered Nutritional Therapist who helps womens in their 40s find vibrant health and vitality, and thrive through perimenopause and beyond.

With nearly 10 years of experience working with hundreds of people, I empower and support women to support their bodies and hormones for a smooth and happy ride in their 4os.

Through our work together, clients have improved their energy, their periods and cycles, their mood, sleep, brain fog and digestion, and learned how to better manage their weight.

I am here to help you get back to YOU so you can have a fantastic time in your 40s.

My signature nutrition and lifestyle coaching approach to supporting women with their health and wellbeing is refreshing, down-to-earth and realistic.

A FREE, no-nonsense PDF guide to Mastering Perimenopause and learn how to master your hormones in your 40s for more energy, better sleep, balanced mood, easier periods and so much more.

What does progesterone do and why does it decline in your 40s?

How to get rid of peri menopausal symptoms

You May Also Enjoy 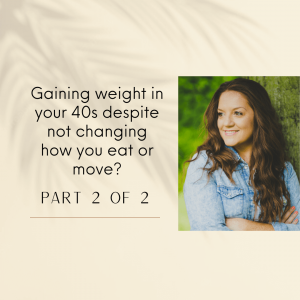 In your 40s, as you move through perimenopause, your body starts to become better at storing body fat. However, the GOOD NEWS is that some simple diet and lifestyle interventions can prevent or reverse the dreaded perimenopause weight gain! 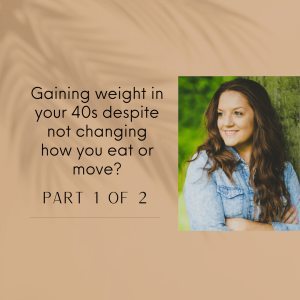 Gaining weight in your 40s despite not changing how you eat or move? (Part 1 of 2)

Are you noticing weight gain, particularly around the middle, since moving into your 40s, despite not having changed anything you do or eat? You’re not alone! As the female body moves into its 40s, it becomes better at storing fat. This blog explains why and in part 2, I’ll tell you what you can do about it. 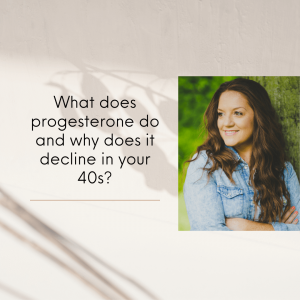 What does progesterone do and why does it decline in your 40s?

Oestrogen and progesterone work TOGETHER to exert health protective effects, so we mustn’t overlook amazing progesterone. In the blog, I explain why you need progesterone, how you make it, why it starts to decline in your 40s, and how to support its production. 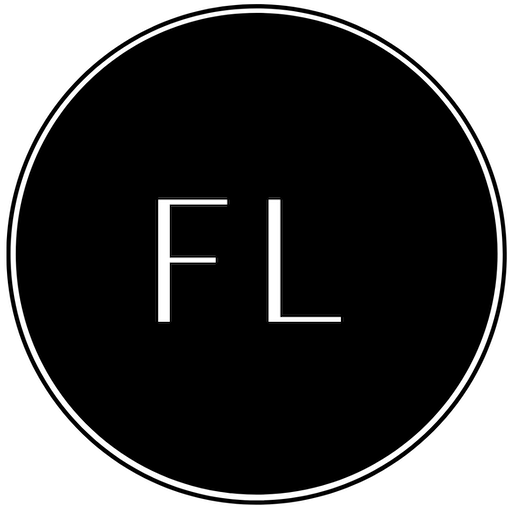 ✨In a previous post I explained some of the key

Your 40s (perimenopause) is a bit like second pube

Last week I wrote about why you might be gaining w

😖 Maybe you know about perimenopause, and you k

A FREE, no-nonsense PDF guide to Mastering Perimenopause. Learn how to master your hormones in your 40s for more energy, better sleep, balanced mood, easier periods and so much more.